What Is The Weather Like In Puerto Rico? Tips Before You Arrive!

You need a vacation and you decided that Puerto Rico is the destination you choose. Great! Now you ask yourself “What Is The Weather Like In Puerto Rico?”

Where is Puerto Rico located?

The Island of Puerto Rico is a tropical paradise with beautiful sandy beaches, incredible vibrant tropical green vegetation and the delicious food that will make someone wanting more.  There is no reason why everyone who visits Puerto Rico falls in love with the island, but the real question is what is the weather like in Puerto Rico?

Puerto Rico is just east of the Dominican Republic and west of the British and US Virgin Islands.  The island sits itself in the Caribbean Sea and the Atlantic Ocean.  Believe it or not, Puerto Rico has more than 100 small islands that surround it!  Some popular smaller islands are Culebra and Vieques.  The capitol of Puerto Rico is San Juan and founded by Juan Ponce de León in 1521.  Some historians say San Juan is the oldest colonial city in the Americas while others argue that St. Augustine, Florida is the oldest.  The population of Puerto Rico is 3,285,874 according to the 2020 census.

Here is a list of activities to do while traveling to Culebra or Vieques, but keep in mind that to reach these islands you will need to travel by plane, boat/ferry or some kayak.

In Puerto Rico, the weather is typically ranges from 80°F (26°C) to 83°F (28°C)  throughout the year with January commonly being the coldest month of the year at 70°F  (21°C).  With Puerto Rico’s climate, the island does not have all the four seasons that some are accustom to like spring, fall and winter.  With that being said, rain is usually on the forecast at some point during the day, but does not last too long.  We recommend checking the weather channel before planning any activities when venturing out.

Another thing to keep in mind is that Puerto Rico has a hurricane season.

There is also a rainy season in Puerto Rico to keep in mind before traveling.

As stated by Wikipedia, the rain season is from April to November; the amount of rain produced can vary depending on the area of the island you are staying at.  Below is a diagram that shows average annual rainfall in Puerto Rico from 1981 to 2010 courtesy of the National Weather Service.

Humidity on average is about 80% during the year. 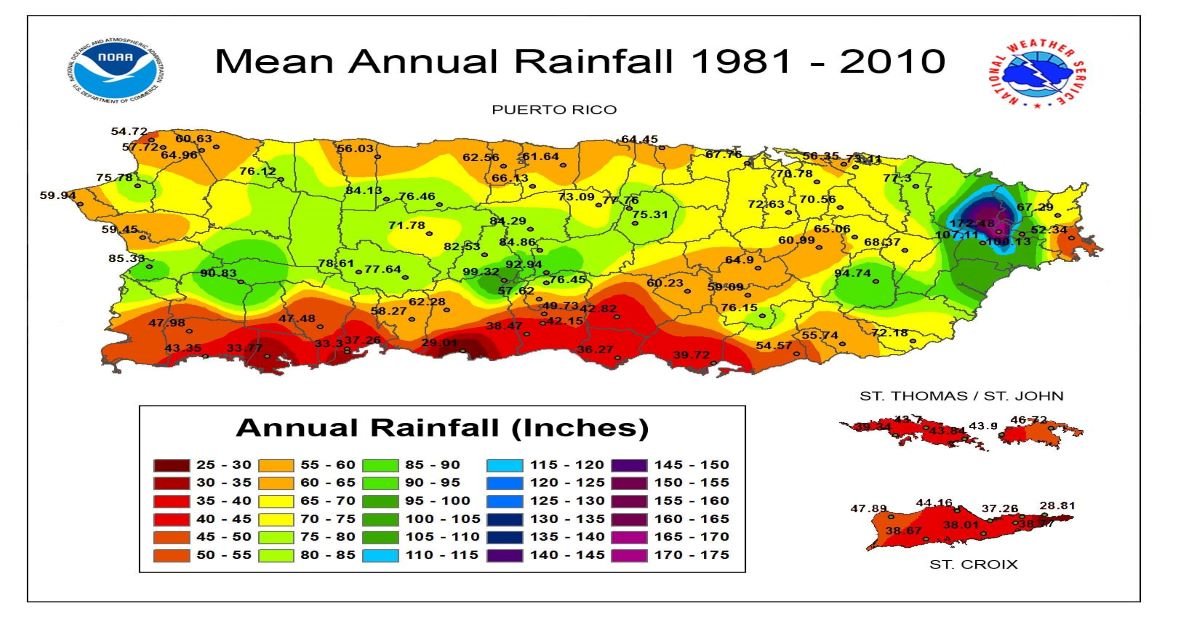 Weather in Puerto Rico can greatly differ depending on which part of the island you are staying at.

Puerto Rico has six different climate regions.  With that being said,  central Puerto Rico experiences more rain and with the island’s la Cordillera Centra, which is the central mountain range, can have a drop in temperature.

While Puerto Rico’s weather can vary depending on time of year, the island is located in a tropical region that is surrounding by water.  Humidity, rain and heat make up mostly what the weather is typically like in Puerto Rico.  So shorts, tank tops/t-shirts and sandals would be the best option for your attire while visiting.  However, brining a few pair of pants won’t hurt in some instances.

Tips On How To Fix Orange Flame On A Gas Stove

Why Does AC Compressor Cycle On And Off?...

How Long Does It Take To Fill A...

How Hard It Is To Become An Electrician:...

Here Is How To Thicken Hand Sanitizer

How Do 3-wire Christmas Lights Work? Find Out...

A Detailed Guard On How To Clean A...

Can You Put Construction Paper In A Printer?...

Does Dry Cleaning Remove Stains: Read This To...

About The Tasty fork

The Tasty Fork is a home & garden blog that let you read most effective and accurate guides on home improvement. We are providing latest tips and tricks so you can keep yourself updated when it comes to home decor. Keep reading and enjoy!

A Detailed Guard On How To Clean...